It’s not every day that someone complements you on your fungi, but that’s exactly what happened to us today. Apparently we have a fabulous array of fungi, here at Badwell Ash Holiday Lodges. We didn’t know that, but we do now thanks to one of our guests who’s very knowledgable on this subject!

The main picture shows a Shaggy Ink Cap. A very beautiful mushroom that is cap shaped in its prime but is shortlived and rapidly degenerates into a sticky black goo which was once used as ink - hence the name. It is edible if carefully cooked but is toxic when taken with alcohol because it inhibits the ability of the liver to break down alcohol. So drinkers beware!

The following photos show some of the Bracket Fungi that are on one of our trees. It is a long-dead willow, and the proliferation of this type of fungus shows that it is in the terminal stages of decay. Bracket fungi eat away at the heartwood of dead trees, growing very large whilst weakening the structure and eventually causing the tree to collapse. They are a vital part of the tertiary process of turning wood back into soil and nutrients for the next generation of trees and plants. And a good advert for leaving dead wood in situ, if you can.

Finally, the Orange Grisette is a wonderful combination of brown, yellow, white and grey. It loves damp shady spots under birch or beech trees, of which we have plenty. It is edible but as with all fungi, be totally sure you have identified the right one, especially in this case as the grisette is not dissimilar from the Death Cap mushroom, which is fatal to humans! 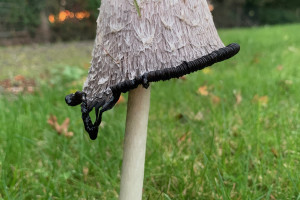