Well we may as well say it: the fishing has slowed down over the last week or two at Badwell Ash Holiday Lodges. Our guests have had to fish hard for their catches and it has been tough going at times, hot helped by some truly inclement weather. The fish are still being caught but, aside from the ever-hungry Perch, the bites are coming less frequently. We know the Main Lake is well stocked with fish, for they can still be seen: large shoals of Rudd and skimmer Bream at the surface, and chunky Common and Mirror carp cruising the margins or hanging out under the trees and decks. So why have things slowed down?

It’s a question of temperature. Fish are poikilotherms, meaning they are cold-blooded creatures and rely entirely on their surroundings for warmth. A fish will typically be around two or three degrees warmer than the water in which it lives. Warmth creates energy, which drives activity and in turn, appetite. Put simply, the colder the water the less the fish will feed. And our lakes have of course been cooling. The water temperature is now around 10 degrees centigrade, down from closer to 20 in the summer. The water temperature range at which fish feed most actively is 12-18 degrees. Any hotter and the level of dissolved oxygen falls, making fish languid and prone to lethargy. Any colder and fish will slow down due to lower energy levels.

This is particularly true for Carp, which enter a semi-torpid state below 8 degrees. Carp don’t fully hibernate, but they do slow down and keep to a smaller territory often in deeper water, where they shoal up with other carp and will lie in a more or less motionless state for most of the day. This is perfectly natural: movement requires energy and there is less aquatic food available in winter, so the carp need to conserve energy and body mass until the spring.

It is less true for silver fish such as Roach, Rudd, Perch and Bream. They have smaller reserves of fat and therefore need to feed more frequently throughout the winter. Keep in mind also that these fish are native to the UK and therefore much better adapted to our colder climate than the Asia-derived carp! Our silver fish will even feed in sub-zero temperatures with ice on the water, as I well remember from winters spent fishing on the Grand Union Canal as a kid.  So, how to catch consistently in the colder months? This is the time for brightly coloured maggots or even pinkies on a small hook. Remember to feed your swim more sparsely with less free offerings as fish will consume less and more rapidly become full. Of course a ‘Snow Carp’ is the dream of many an angler, and this is very possible at Badwell Ash. If it’s carp you’re after then live baits such as maggot and worm are often better than boilies and sweetcorn as we move into late autumn and winter; even a torpid carp will find it hard to resist a wriggling bait. But remember you will need to hunt more actively for your carp: they will be lying in tight areas and not moving much - it’s a case of you finding the fish rather than the fish finding your bait. Tight lines! 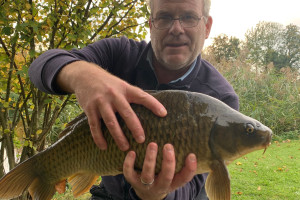